Newhaven MP Norman Baker is seeking that HSBC revisit their decision to close the last bank in Newhaven, following recent announcements of investment into the town and continues to encourage the banking firm to consider leaving a cashpoint in place in the town.

Significant investments into the local economy have been announced throughout July to include planning permission for Newhaven University Technical College providing educational opportunities for 600 students, approval for Rampion Offshore Windfarm positioning Newhaven as the South East Centre of offshore renewable technology and £19 million investment into regeneration for the town to include new port road access.

Norman says “HSBC cannot ignore the substantial investment that is being made into Newhaven, bringing local jobs, development and boosting the local economy. This is a real regeneration boost for the town.

“This is not the right time to be considering closing the Newhaven branch of HSBC, just as the town is getting a boost of funding and will see more people coming into the town. People will want to access banking services locally and not be travelling between towns to get a counter service.”

Newhaven MP Norman Baker warmly welcomes news that Rampion offshore wind farm, off the coast of Sussex, has today been given consent from the government to go ahead.

This project is expected to support over 750 jobs and bring over £2 billion of investment into the UK’s economy.Once built, the wind farm would generate enough electricity to power approximately 450,000 homes.

Norman has been actively lobbying Energy Secretary Ed Davey on this issue, both to grant permission and to do so quickly to bring further increased investment into the area and securing greener energy sources.

Norman says “This is great news for Newhaven and something I have lobbied hard for. It is positioning Newhaven very well as the South East Centre of offshore renewable technology for the century ahead. It is great for the economy and great for the environment

It is a good thing the Energy Secretary has not listened to the ‘naysayers’ who continually talk down renewable energy.

This offshore renewable energy source will be able to provide energy for approximately 450,000 homes and is an investment in our energy security for the future, helping to make Britain self-sufficient in the future.”

Newhaven Lib Dem MP Norman Baker says he is disappointed that the last bank in Newhaven will be closing its doors for the last lime later this year and has sought assurances that people of Newhaven will be able to access a banking service locally.

HSBC Bank plc have announced that the Newhaven branch of the bank will close on Friday 12th September and will shortly be writing to all customers. Nearest branches for customers will now be in Seaford, Lewes or Brighton, all of whom operate longer opening hours than the Newhaven branch.

Lester Wynne-Jones from HSBS Bank plc says: “We have made this decision with great reluctance, but after a careful analysis of the branch’s commercial viability it was clear that it is no longer generating the custom necessary to justify its continued development.”

Norman Baker MP has met with HSBC representatives to get assurances that residents in Newhaven will still be able to access the services of the bank, especially the 23% of customers that HSBC say only use the Newhaven branch and are not registered for telephone or internet banking.

Norman says: “I have been assured by HSBC that customers not wishing to access alternative branches will be provided support in how to access banking via the Post Office or training for alternative banking services. I have also insisted that HSBC investigate leaving a cash machine in place following closure, to maintain some sort of service to its customers

“Although I appreciate viability of a branch is a priority for HSBC, this does not help those individuals who are reliant on a counter service to access their own bank accounts and it is a real disappointment to those customers. Not everyone wants to bank online.”

Newhaven’s Lib Dem MP Norman Baker has welcomed East Sussex County Council plans to develop and improve cycle and pedestrian access between Newhaven and Peacehaven and is calling for swift action for works to start.

East Sussex County Council has included the shared cycle and pedestrian way along the A259, as part of its Capital Programme for Local Transport improvements 2014/15, following public consultations.

Norman says: “Improvements to safety and access for cyclists and pedestrian travelling between Peacehaven and Newhaven are long overdue. A long section of the A259 between the two towns has for years been separated off due to road subsidence and I have continually called upon the county council to do some basic work to make this readymade channel into a cycle path”

“To have these works included in the capital programme plans is a small victory for those of us that have been fighting for this over the years. The council now needs to make sure we use no more time” 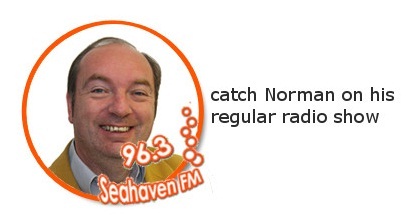